Jean-Michel Basquiat’s SAMO graffiti and his no-wave band Gray sneak onto my train of thought, and the train breaks down into boxcars of found phrases. Countercultural, determined not to go home again, determined to make it happen. Darling of the art world. Acting out the society’s wildest dreams. Putting that smoke in the air. Graffiti broadcast from the control room, as in the Times Square Show or the movie Downtown 81. For early critical celebrations of Basquiat’s work, see Rene Ricard’s “The Genius Child” in Artforum, and Robert Farris Thompson’s Flash of the Spirit: African and Afro-American Art and Philosophy. Things done by chance. By the end of the night, I’m listening to Funkadelic and thinking, “Fried ice cream is a reality!” Funkadelic’s intervention is not all that different from Basquiat’s. It’s as if a strikethrough artist painted over Jefferson Airplane’s After Bathing at Baxter‘s to create the richly allegorical / mythopoetic cover art to P-Funk’s One Nation Under a Groove. The psychedelic cultural revolution lies secreted away there, a transmission for those who have ears to hear and eyes to see. 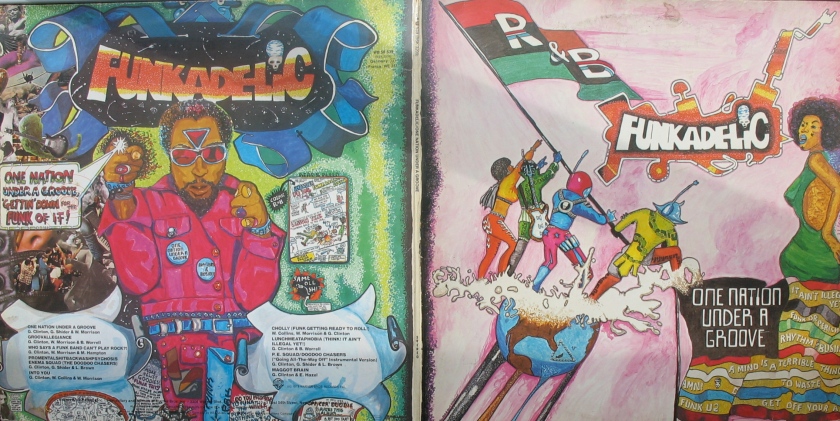