Go deep into consciousness-diminished-to-swirling-mandala-made-of-mealworms trance-state with Healing Sounds by Dr. Christopher Hills & the University of the Trees Choir. 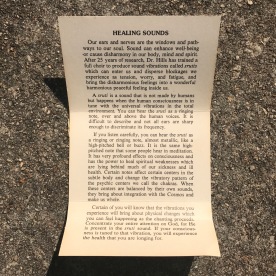 (Check out the Wikipedia page for Hills, by the way: sailor, commodities trader, Rastafarian, mystic, natural foods advocate. Quite a character!) I use cassettes like that to recharge myself after a grueling day at work. “The more you attempt to contain consciousness,” Hills argued, “the more you limit yourself.” As the universe, so on earth. All becomes clear and simple. What do games like DOOM do to consciousness? Heads link up and react upon the same virtual world. A technologically assisted version of what “indigo children” claim to do unaided. Am I a producer of ADHD prose? They try to medicate those of us who think differently than the majority. On days when I’m free from work, I sometimes cut out mid-afternoon and play Thymme Jones, a new tape on Unifactor by Luminous “Diamond Ben” Kudler.

Precision-made videogame tones soundtrack imaginary force-beams, fires, and explosions; also, occasional jump-sounds. Afterwards I contemplate the tape’s capacity to foster psychological projection into sonic avatars. Before listening, I too often and without thinking tended to limit my conceptualization of avatars to two kinds: objects encountered IRL, and icons seen onscreen. I had forgotten that sound, too, forms a distinct third kind. Scores can be entered into through performance by players. This entering into and drifting amidst is not unlike use of a park. As for instance, last night: talk of autopsy tables at the kudzu park. Kudzu forests, kudzu valleys. A friend recommended Tales from Moominvalley and Moominvalley in November, two books by Finnish author Tove Jansson. Our shadows extended upward over the path ahead of us as we ascended the side of the quarry. I am the world’s head browser and chief ontologist. Let me take for a ride an imaginary Airstream, while the monster who heads my country threatens to “totally destroy” whole nations. The Hell’s Angel now drives a truck.