Broadenings are sometimes later discovered to have been narrowings. Linguistic parts dropped off in transit. On certain nights, I hear it better than on others. Liquid goes down a wrong pipe, so I drink some water to clear my throat. At length, I feel awakened. The automatic self accepts its demotion to a mere infernal device running its engine out back in the garage. Words will not go wanting after that one, though it’s so hard to shake the sense that there are right and wrong ways to write. I pause and scrutinize too often. I lock myself in a spartan linguistic universe. I wish I could see — and not just see but enter — the landscapes depicted in the Kay Sage painting, “I Saw Three Cities.” 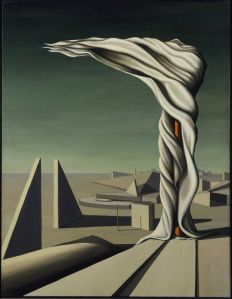 Daily life is too often that from which I want to wake. Become the Godhead; cross beyond the Proscenium Arch. I’m kind of liking this website Melt: “an archive of esoteric and contemporary culture.” But then I realize it contains dead links; the content I request is unavailable. In his final, four-part video “Parallel I-IV,” Harun Farocki narrates the invention of the first houses and trees within virtual reality.

The virtual, I think to myself, has always existed alongside the actual as a component of Being. Social constructs always borrow from both — and yet, the entire mode of representation also evolves in leaps across changing material platforms. “Water in motion made from dashes and dots.” In general, though, when it comes to digital imaging, I suppose I prefer symbolic forms rather than filmic realism. Those of us hunting for the apex predator of contemporary psychedelia need look no further than Nmesh’s Pharma, a 42-track double-cassette monolith released earlier this year on Orange Milk Records.

Imagine a sped-up maximalist vaporwave version of DJ Spooky’s Songs of a Dead Dreamer. Midway through, a voice intrudes, echoing forth through the void, the planetless space, to ask, “Does the world exist if I’m not watching it?” It appears out of emptiness, and to emptiness it returns. Is the world generated by the gaze that falls upon it? These are all names for the virtual creations of an alien-human Other. Who are we in relation to this Other-projection? A storybook made of videogame parts. Is that how the pre-Hellenics viewed the world? Games haven’t just become more realistic — they’ve also become more abstract, overlaid with graphs and maps and floating perspectives. Farocki’s Parallel videos reveal piece by piece an entire metaphysics of virtual worlds. “Google that shit, homes,” I tell myself, whispering inwardly for the self below.