Sarah and Frankie listen to “Something Good,” one of many songs by Lindsay Munroe that Frankie’s been having us play of late. I dream of a ukulele as sun shines through an upstairs window. Record Night’s a thing again — though rebranded now as “Music Night,” and designed with a bit of forethought so as to approximate the style and spirit of a Rastafarian reasoning session. Thumbing through stacks of vinyl, I settle upon several I hope to share with friends. Rita Marley’s “One Draw” will make an appearance, as will “Şu Derenin Sulari,” a track from an LP that turned up in the bins by Turkish psych outfit Hüsnü Özkartal Orkestrasi.

Trees bloom, flowers grow wild in the grass as Bicycle Day gives way to 4/20. Cardinals alight on branches, visiting throughout the day. I delve again into World Psychedelic Classics 3: Love’s a Real Thing. The cover notes describe the compilation as “an African assimilation of the psychedelic revolution — distorted, political, hallucinogenic, and, of course, danceable. Thousands of miles from the Summer of Love’s utopian origins, yet somehow, not so far away…” It’s an amazing collection: twelve tracks of funky West African psychedelia from the early 1970s. Tracks like Moussa Doumbia’s “Keleya.”

External influences interact with indigenous traditions and vice versa. “Acid rock as something familiar if not entirely home-grown,” writes Ronnie Graham, who hears on the album “the African beats missing from Monterey and which Woodstock lacked.” One longs for a transnational history of psychedelia. Brazil, Japan, Germany, the countries of West Africa: let us tell of how minds manifested in these countries. In the meantime, though, let Luaka Bop and its World Psychedelic Classics series serve as our guide.

A friend introduces me to Novos Baianos’s “Mistério do Planeta,” a brilliant bit of Brazilian psychedelia from 1972. After two initial listenings, I attempt the admittedly foolish task of trying to read the song’s lyrics through a Google translator. “I participate being the mystery of the planet / […] / That I pass by and be him / What is in each one.” The band’s vocalist admits to being no more than a malandro: “a street kid from Brazil.” “But I walk and always think,” he sings, “with more than one / so no one sees my bag.” We, too, are more than one. That is what we are here when we communicate via trance and song. The song is an anthem of psychic liberation. “I participate being the mystery of the planet,” sings the poet, “I’m showing how I am / And I’ll be like I can / Throwing my body to the world / Walking Everywhere.” Listening again while reading along, knowing the translation to be an imperfect one, I am awed nonetheless, both by added dimensions of meaning, and by that which is in excess of meaning: the angelic bebop scat / free indirect discourse that happens between chorus and verse.

The “new” look of psychedelic art and design of the 1960s was, as a recent Vox video shows, about recooking the past. “Art Nouveau on acid.” For Huxley, meanwhile, the psychedelic experience is about Moksha, a concept from Eastern spiritual traditions involving freedom from samsara, or access to a truth or a reality beyond the cycle of suffering and rebirth. I find myself returning to Huxley’s book The Perennial Philosophy, published in 1945, immediately after WWII. The book assembles passages from the writings of saints and prophets from traditions of Eastern and Western mysticism. The German philosopher Gottfried Leibniz is the one who named this strain of esoteric wisdom “the perennial philosophy.” There’s a universalizing bent to perennialism, arguing as it does that all religions, despite their differences, point to the same truth: “That Art Thou,” or “Thou Art That,” “the immanent and transcendent Ground of all being” (Huxley, The Perennial Philosophy, p. vii). There is an eternal Self in the depths of each person. Or as Marcus Aurelius claimed, “the universe is a single living organism possessed of one substance and one soul, holding all things suspended in a single consciousness and creating all things with a single purpose that they might work together spinning and weaving and knotting whatever comes to pass.”

Constellations of thought rotate around like the cover of Led Zeppelin III or the wheel of a rotary telephone, an object common to domestic space during the era of my childhood, replaced over time by cellphones. Thinking of the Led Zeppelin album, I kneel beside my unalphabetized, unsystematized wall of vinyl whispering, “Come out, come out, wherever you are!” 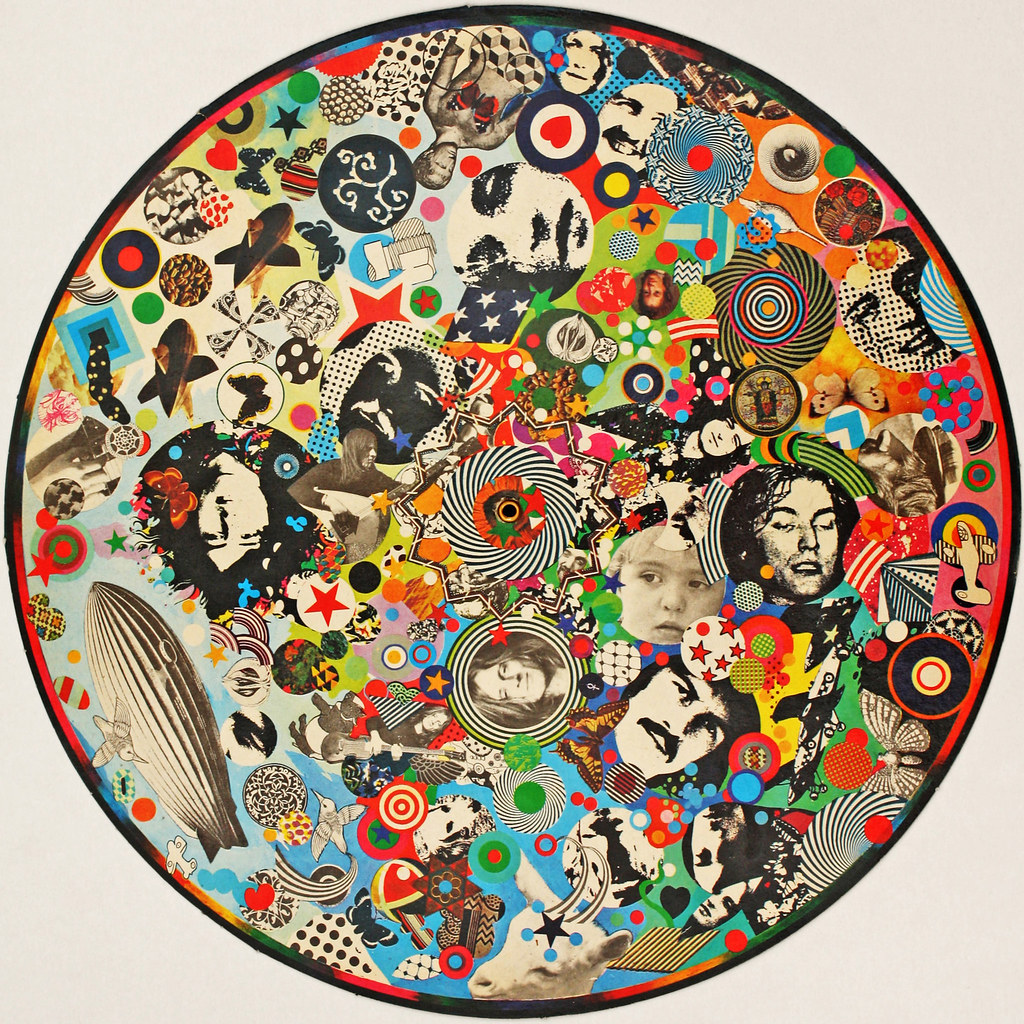 There it is, a psychedelic thing of beauty. “Visual Creations by Zacron,” reads the circular stamp beside the credits on the inner sleeve. I guess this device I’m imagining is a volvelle, a wheel chart featuring concentric circles with pointers. Volvelles were used in medieval Europe to calculate the phases of the sun and moon. “While at the Royal Academy Schools,” I learn, “Zacron produced a rotating book” called One Line and a Box. 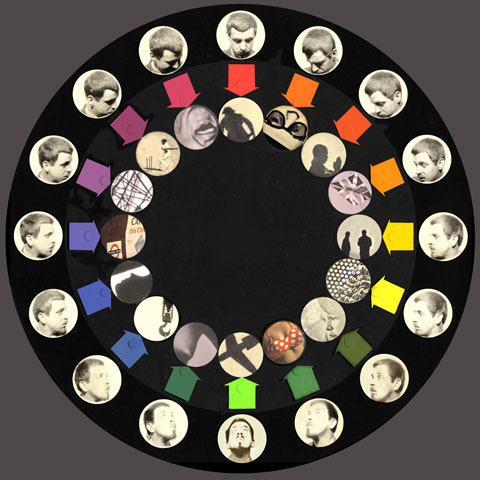 Users could ask the book “questions about their interaction with the environment,” as they might using devices like the Tarot or the I Ching. From this earlier work, Zacron derived the idea for the design of Led Zeppelin III. My courses begin to shape up into elaborate nested allegories.

To encounter it is to encounter a psychedelic beacon, the acid equivalent of the holy spirit, beaming a signal to fellow heads across time. What is it that we’re trying to tell one another, I hear myself asking, we who have had psychedelic experiences? Where did we find ourselves before, in the midst of, and after? The lyrical persona in “A Thousand Years” speaks as one frustrated by subjecthood and identity, disappointed to find itself left again with a face—but the voice persists in its attempt to communicate. It’s an Orphic persona: one who attempts to realize and comprehend the totality, one who bears news from the other side. The news seems to be that all that is Good is trying to win us to its side. Songs are credited to band member Phil Pearlman, a name that recalls past parables as well as poems from the beginnings of English literature. Pearlman’s two incarnations prior to Relatively Clean Rivers were called The Electronic Hole and The Beat of the Earth. After a conversion of sorts involving a bible on a beach, however, Pearlman changed his name to Seth Philip Gadahn. Quite a story there, for those who wish to look.

Since we’re creating the universe (you and I!) we might as well have some fun, as do the members of the Incredible String Band in their film Be Glad for the Song Has No Ending (1970). (An essential psychedelic artifact, communicating secret knowledges from heads to fellow heads across time. The sections on band member Robin Williamson feel particularly otherwordly.)

Dancing down the sidewalk singing from lampposts, Oyster card in hand, we make our way, beach beckoning from beneath the pavement. In just a few short days I take leave of the States for a month abroad. The story at this point is one of spontaneous grandular progress, self-actualization into a grand unknown. Who will we be on return from this journey? I search old notebooks for clues. A head speaks to me across time, knowing perhaps that a future me would eventually get the message.

I want my Age of Aquarius! “Grab passion,” sings the radio. “Make it happen.” Next thing I know, I’m listening to “Ride My See-Saw” by The Moody Blues and digging it, entering through doorways new states of mind.

Thinking truly is the best way to travel. Floating like a kite and then grounded again, eyes open, the world brighter, sharper, and superimposed atop it a corridor of integral concepts. That album of theirs, In Search of the Lost Chord, allows for quite an experience. I follow it with Moby Grape’s Grape Jam — a relaxing listen, though a bit sloppy and indulgent. But that’s what’s so wonderful about it: “This music happened,” as the group says on the back cover of the LP, “when we could escape for awhile the intimidations of the virtuosity and perfections demanded by posterity. Relaxed, free, unselfconscious — Just laying down some music when the mood struck.” Bellbottomed legs leap and spin among a tribe of hippie whirling dervishes in Milos Forman’s Hair, which I watch afterwards while I practice breathing.

I start it right with World Psychedelic Classics 3: Love’s a Real Thing, a compilation from 2007 that has me up on my feet ready to march to the sound of Moussa Doumbia’s “Keleya.” Next thing I know, I’m watching an African movie from Senegalese writer and filmmaker Ousmane Sembène called Ceddo (1977). Like Huxley’s mynah birds, my students help to bring me to attention. I flower, I bloom. I pick up and thumb through a copy of Edward Espe Brown’s The Tassajara Bread Book. Among the rich assortment of cookbooks tossed into being by the counterculture, Brown’s is one of my favorites. Definitely a book written to and from “heads” — those of us who speak to each other throughout the ages. Sarah and I plan to create a print to hang in our kitchen based on the book’s opening poem, “A Composite of Kitchen Necessities.”

How is it that both the United States and China hosted movements of urban youth to rural areas, “back to the land” in the one, “down to the countryside” in the other, to such vastly different effects? Let us care for life in all its forms, including the form it took in Dirt Road to Psychedelia, a film about Austin, TX in the 1960s. The radical comix artist Gilbert Shelton emerged from that scene, as did Roky Erickson and Janis Joplin. The documentary reinstates in consciousness lesser-known classics, like Take Me to the Mountains by Shiva’s Headband. My pedagogy begins by offering students collective power-sharing and shared ownership in the classroom. Once a class collaborates on revision of the syllabus, they’ve become co-creators of reality. Class consciousness foments and rises. They witness their vast and previously unrealized collective capacities.