Reading High Weirdness is a bit like reading Dante’s Inferno. Davis performs admirably as the book’s Virgil, poking around amid radioactive embers while touring readers through the literary remains of various occult ground zeroes and psychedelic Superfund sites of the 1970s. Like the weird fictions it analyzes, the book activates one’s internal Geiger counter. Readers are warned at the outset to proceed with caution — and rightly so, as what follows provides cause for both awe and dread. I can think of no other book that resonates so readily with the opportunities and perplexities of our moment.

Ellen Sander’s book Trips begins with a lovely dedication to “the incorrigible spirit of the Sixties; a seed planted, a weed grown, the promise, forever beckoning, of a garden.” That garden is the same one that beckons to us as the before and after of these trance-scripts. Sander was an early rock critic who covered the scene for Hit Parader, Vogue, and Saturday Review, among other outlets. Her book documents a change in awareness, the consequences of which continue to be felt today. She wrote in an age of bombs, flying saucers, superpowers, rock and roll groups — the same age of “high weirdness” analyzed by Erik Davis in his recent book of that title. These were the years when we first made contact — people of the world united in dance. Where has it led us, though? Localized changes, small but significant, keep me hopeful, each of us doing what we can. One of my nephews honors me, for instance, by adopting my habit of wearing colored Tyvek bracelets, the kind acquired as tokens of admission during visits to amusement parks, concerts, carnivals, and pools. It’s a quirk of mine, I guess — part freak flag, part makeshift memento mori — something I’ve been doing ever since I was a teenager. A modest bit of deviant self-fashioning.

Home again, stretching, settling in after seven weeks of travel. Initially I find myself needing to focus on nesting, repair, self-care, readjustment. Vacuuming feels like manual operation of a Photoshop airbrush. I get better results and greater satisfaction when I kneel down and clean the floor with a wet rag. If that’s what the life-world needs, then so be it. I give gladly. Throughout the day, I catch myself renegotiating use of will, contemplating my relationship to various entities and objects. Slugs, spiders, chairs, old bits of clothing, bottled water: all of these things require care and attention, as does Erik Davis’s High Weirdness, a copy of which I pluck from the pile of mail that arrived for me while I was gone. Also in the pile is a copy of Fredric Jameson’s new book Allegory and Ideology. Time to start reading, I tell myself. Both books feel weighty, but High Weirdness is the one that warrants immediate attention, I decide after some hemming and hawing, the Stranger Things soundtrack modulating through my head. The Davis book is the one I’ve been waiting for these last few months. It feels timely. It speaks to present hopes and concerns. As Jeffrey J. Kripal notes in his blurb on the back cover, “May this book, like a glowing UFO, land on your lap, and every other lap, and weird our world beyond all measure.” I approach it with a degree of trepidation — but also with great excitement. Across from me on the wall of my dining room hangs a reproduction of the famous Ambrosius Holbein engraving from Thomas More’s Utopia, looking suddenly like an emblem representing macrocosm and microcosm: Genesis, Paradise Lost, and Frankenstein woven into a single grand narrative, the figures down at the bottom reminding me of the debaters from the garden of branching paths. “The devil in the details,” as one commentator puts it. The figure I’ve imagined in the role of Adam wears the name “Hythlodaeus” in the engraving, referring to the character in More’s text whose name means both “God has healed” and “Speaker of nonsense.”

An ant explores the surface of a sunlit outdoor table. I sit across from it observing and writing on my in-laws’ back patio. A neighbor waters a garden next door as I read Erik Davis’s review of the “Hippie Modernism” exhibition for Frieze magazine, written two years ago, when the show was up at BAMPFA. This is the show that inspired the course I taught this past spring. There’s an elegance to the review’s list of the show’s achievements. My eyes dwell for a time on an image included in the review, a digital reproduction of a 1965 painting by Isaac Abrams called Hello Dali. 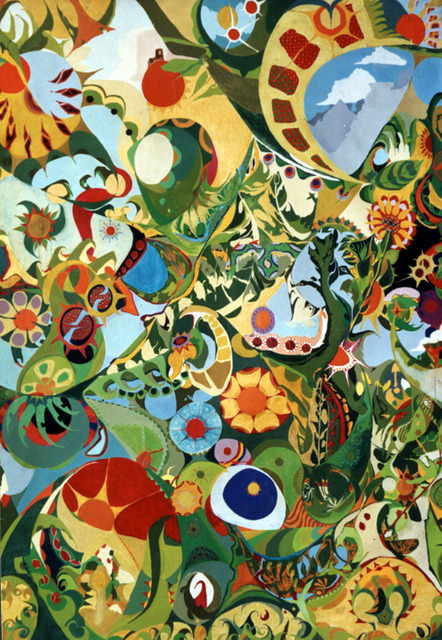 I see echoes of the painting as I look over at flowers in my in-laws’ garden. I let this work motivate me to complete my project. I watch videos, like the radical Italian design group Superstudio’s “Supersurface: An Alternative Model for Life on the Earth,” a film of theirs from 1972.

Balm applied, the goad to work kicks in. I note down books I need to order, like Art Boericke and Barry Shapiro’s Handmade Houses: A Guide to the Woodbutcher’s Art. After a breakfast of homemade waffles and orange juice, I burrow away and watch Davis’s recent talk, “A Brief History of Queer Psychedelia,” where I learn about Gerald Heard’s involvement with the Mattachine Society, one of the earliest gay rights organizations in the United States.

Isocrates was the pseudonym that Heard used for the articles he published in the society’s magazine, the Mattachine Review. He also wrote articles for ONE, another early gay publication, under the pseudonym D.B. Vest. Davis also unveils a weird book of Heard’s written in the late 1960s called AE: The Open Persuader published under the pseudonym Auctor Ignotus (or maybe W Dorr Legg). Tartarus Press published a collection called Dromenon: The Best Weird Stories of Gerald Heard in the early 2000s. That, too, is a book worth tracking down. By midafternoon, elements have clustered together to cause me to wonder at the overlapping histories of psychedelics and ritual magic. The famous LSD chemist Augustus Owsley Stanley III noted that his early experiences with acid coincided, for instance, with his reading of The Kybalion. Most of the first-generation Western psychedelic crowd took up at points with Eastern tantric currents. Some folks also explored Western pagan and esoteric traditions. This outburst of spiritual yearning and experimentation remains for me in its utter mysteriousness a source of fascination. In my state of unknowing about it, the topic seems rich with narrative potential, like there’s a story there waiting to be told. Like the fate of Pedro Salvadores in the Borges story of that name, it strikes me as a symbol of something I am about to understand, but never quite do.

The interior bends and warps as the train travels its serpentine path toward Finchley Road, where Sarah and I disembark to meet with a psychoanalytically-inclined friend of ours at the Freud Museum. We view the famous couch, the books, Sergei Pankejeff’s “Wolf Man” paintings, the Qashqa’i carpets, the vast collection of antiquities, swapping tales of projects and travels along the way. Afterwards the three of us retire to Freud’s garden and chat excitedly about psychedelics. As a kind of last hurrah here in London, I zoom over to Hackney for another event involving Erik Davis, hosted this time by a group called The Psychedelic Society. Davis’s co-stars at the event include Jeremy Gilbert and Lindsay Jordan. As the talks commence, I note down on a slip of paper, “Something cool is happening here: heads coming together.”

I share my couch with my friend’s dog, a cute half-lamb, half-poodle puffball named Stevie. Out in the yard across the street fly a pair of bluejays. Perhaps I should listen again to the birds. Everything else just looks like hype seeking freedom to spend. I wonder which version of London will appear in my coming journey. Will it be one I’ve read about, one I remember? Or will it be a visionary London, an occult London? Will the corporate pentagon of power sour the hour, or will we ascend, rise up, learn about heikhalot literature and Merkabah? For now, let’s assume the “latter” is above our pay grade and seek a third option. As Teilhard de Chardin reminds us, “The outcome of the world, the gates of the future, the entry into the super-human — these are not thrown open to a few of the privileged nor to one chosen people to the exclusion of all others. They will open only to an advance of all together, in a direction in which all together can join and find completion in a spiritual regeneration of the earth” (The Phenomenology of Man, p. 244). Soon I’m coasting along, Erik Davis serving again as guide, recounting for me the account of Indra’s Net from the Flower Garland Sutra — a “cognitive map” if ever there was one! Reading it makes me think for a moment of the here and now, the ground of Being. We are all sustaining and defining one another — so we might as well get good at it. Sunlight, birdsong, subreddits full of horse girls and rats that wash themselves with soap — find room for it, get it in there. Everything in a blog post. Everything on a sheet of paper. Evoke the world as a bird that flies over and tweets. Followed by another, followed by another. Davis explains it well. “Indra’s net is an image of totality,” he writes, “but unlike Teilhard’s vision of the Omega point [the moment when matter evolves into convergence with mind], this holism does not depend upon some apocalyptic moment of future synthesis. In the Hua-yen view, reality is already a totally interdependent matrix, and this unity does not and cannot cancel out difference, the blooming multiplicities that compose each individual event” (TechGnosis, p. 339). With this image of totality set as our map, we become more mindful of our angelic companions. “Buzz, buzz” go the bumblebees. “Buzz, buzz” go birds, cars, pedestrians as we attend to our craft: Self as it attempts to voice, sound, and sense the multitude.

Some dude gets on a mic and introduces my city to Schrödinger’s Cat and theories of parallel worlds as we gather for an outdoor screening of Spider-Man: Into the Spider-Verse. Downtown appears thoroughly transformed by gentrification, landscaping, redevelopment. But there’s still the excitement, the unrealized potential of the assembly of a local, democratic multitude, one that embraces and tolerates its self-constitution through dance, performance, and play. Man-in-the-Moon arrives as Gwen Stacy reviews her origin story. I imagine myself a moonlit Silver Surfer listening to “Lonely Surf Guitar” by the Surfaris.

“By cutting a pentagram into the air or dancing a wild spiral dance,” writes Erik Davis in his account of Pagan ritual, “the self submits to the designs of human and cosmic powers on a more visceral plane than philosophical conceptions or sermons allow” (TechGnosis, p. 192). Davis stresses, though, that this Pagan use of ritual instrumentalizes the latter’s transformative potential, raising worrying questions when what this “technology of the sacred” operates upon and instrumentalizes is imagination and the unconscious. What ritual possesses, however, and what reason lacks, is fidelity to wonder, reverence, and awe. Pagans, for instance, “seek sacred communion” with Nature. Theirs is a “visionary materialism” (194). I can also relate, though, to the “will to utilize” informing the magical practices of figures like Genesis P-Orridge and his group Thee Temple ov Psychick Youth. Their aim is to use magic to disrupt the spell of the global totalitarian society of the spectacle.